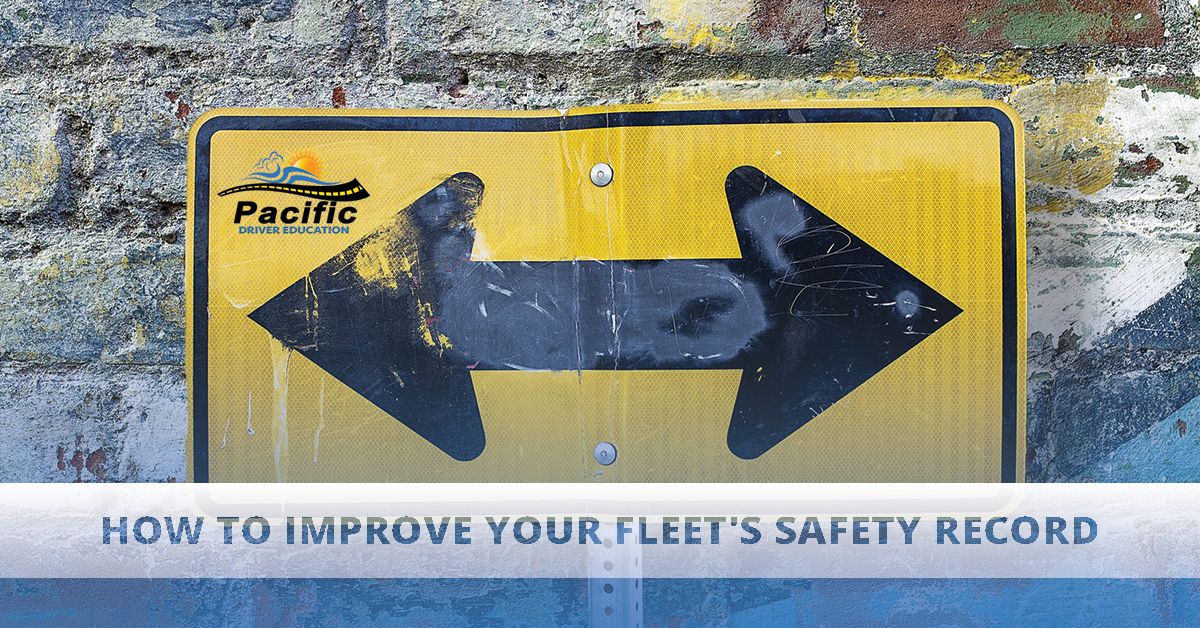 How to Improve Your Fleet's Safety Record

If you are like most fleet managers, you have an annual goal of hitting a certain safety-related number. That might be reducing the number of accidents that occur within the fleet, how much repair work is needed on your vehicles or even your worker's compensation claim rates. Safety is a big deal when it comes to the fleet. Not only does it keep your team safe, but it also keeps your costs low and your reputation within the community a good one. So focusing on safety is a priority, but when it actually comes to improving your team's safety record, how do you do it? Pacific Driver Education offers fleet safety training as one of our driving lessons on offer in Gresham. These courses focus on helping drivers build up the skills that they are going to need in order to stay safe on the road and reduce their risk of being in a preventable crash.

Our classes are just the beginning, though. While on-going education plays a huge role in helping to keep the members of your fleet safe, it's not the only thing you can do. Here are some more tips on how you can make this year the safest year yet for your fleet.

Tips to Make Your Fleet Safer

Vehicles are being made with more and more safety systems built-in. It's rare that you'll purchase a new car now that doesn't have some sort of automatic braking system or a backup warning system in place. If the cars in your fleet don't have these advanced safety systems in place, then it might be time to consider upgrading your fleet. These features are becoming more and more popular for a reason: they actually work. But having the fanciest safety systems on a vehicle isn't going to do you any good if the vehicle isn't being maintained properly. Regular oil changes, tune-ups, and changing filters and hoses are vital parts of fleet safety. Major accidents can occur when the car stalls out or its internal systems fail to respond to the driver. Keep a regular maintenance schedule and stick to it; it might cost you money to get your vehicles serviced, but that money will be paid back in the form of better safety records.

Understand who and what is causing the accidents.

If your fleet has been plagued by accidents, then it's time to look at what's behind them. Eliminating, or at least understanding, the cause can help you be more proactive in preventing them from happening in the future. For instance, a lot of fleet managers will assume that it's their younger, newest drivers who are most prone to being in an accident. That's actually not the case; examining the data will tell you that it's actually drivers who are in their second year of the job and over the age of 25 who are more likely to be in an accident. It might be because they become complacent after a year, who knows. But once you understand that piece of information, you can implement more safety training for drivers in that demographic to help keep your numbers down.

Put electronic driver data to work for you.

Most fleets are now using some form of electronic driver tracking. There is a multitude of benefits to these systems, but most fleet managers are just scratching the surface and using the tracking devices to ensure drivers aren't wasting time on the job. You should be doing so much more. These systems are now so sophisticated that they can give you insight in driver safety. You can see data about what bad driving habits are plaguing your drivers and then work with them on an individual level to correct them. Installing an electronic monitoring device in your fleet vehicles does something for the driver's mentally, too; they are far more likely to practice safe driving habits when they know you have the ability to check in on them. If you aren't already using a system, it's time to invest in one and see how it can help your business.

Create incentives for being safe.

Sometimes safety isn't incentive enough for your drivers. It can boost your rates (and driver morale) if you establish an incentive program for safe driving habits. Set key performance indicators for your drivers regarding safety and then determine what incentive you'll offer if they hit them. It's important to set a goal that's feasible but going to require a bit of work on the drivers' parts to achieve. If it's too easy, they won't take the challenge seriously. If it's too hard, it can be discouraging and actually have the opposite effect that you want it to have. As for the incentives, cash always works well.

Put a "zero distractions" policy in place and enforce it.

The number one cause of preventable accidents is distracted driving. More and more often, this is caused by cell phones. For some reason, it is almost impossible for us to ignore our cell phones when they beep, buzz, or ring, even when we're driving. However impossible it might seem, though, it's an absolute must. More and more states are implementing "no cell phone" policies for drivers. Don't wait for your state to do this for you, though. Implement your own policy within the company and then enforce it. If drivers are caught checking their phones while operating a company vehicle, set consequences such as written warnings, verbal warnings, or even automatic termination. Taking a hard line on this will encourage drivers to put down their phones--and leave them down--while they are in the car.

Make 2018 Your Fleet's Safest Year Ever

When you make safety a priority within your fleet, it does a lot of positive things for your fleet. Your drivers are more likely to stick around with your company, your insurance and auto repair bills go down, your company's reputation goes up, and the job of being a fleet manager seems less stressful. Let our team pave the way to making 2018 the safest year ever for your fleet! Sign your team up for our fleet safety training and driving lessons in Gresham today. Our experienced team will take your fleet through comprehensive training that's focused on keeping them and others safe on the road.

You can arrange for driving lessons with our team by giving us a call or contacting us through our website today. Our team is happy to answer any questions that you might have about our courses and ensure you find the ones that are right for your needs. We're looking forward to working with your fleet behind the wheel this year!